I can hardly believe that I'm writing another Christmas letter. It seems like only a month or so since writing the last one. Yet so much has happened: too many friends have died, from my oldest friend Andy to my lovely Ridgeback Berry; I've visited France, painted a lot, read more books (discovering lots of new authors), and written a few new titles as well. All in all this must have been one of my busiest years for writing, and yet it still seems as though I blinked and missed most of it! 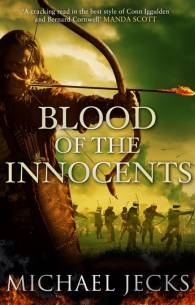 The published books range from my own titles, such as Rebellion's Message, the first in my new Jack Blackjack series, which I like to think of as my Bloody Mary stories, since they're set in the reign of Mary Tudor, to Blood of the Innocents, which is the final book in my Vintener Series, set in the Hundred Years War. Whereas Rebellion is quite a lighthearted read, which I wrote much more for personal enjoyment, Innocents is a more serious story about how war affects people, whether those who are victims or those who are on the winning side. I think the horrific situation in Aleppo this year demonstrates that the human race has not extinguished the brutality at the heart of those who want to dominate others, whether for power or money. Blood of the Innocents looks at such events through the eyes of a small band of fighters, the men who are forced to trudge on and risk their all for other people's ambition.

On a lighter - much lighter - note, I was delighted to be involved in two books this year that were more collaborative. One, The Sinking Admiral, is a follow-up to the title written some 90 years ago by the members of The Detection Club. In it, a number of leading crime writers gathered together to write a story that could then be pulled together by the masterful Simon Brett. Then, in order to celebrate the 80th birthday of Peter Lovesey, The Detection Club published a collection of short stories called Motives for Murder. You can look out for my story there: Alive or Dead!

Naturally, these are all stories I wrote in 2015. So what else have I been doing? This year I've written the follow up to Rebellion's Message, and the first in a new series based on the Crusades, which looks at the ordinary pilgrims: what motivated them, how did they live (and die) and what made more and more Europeans decide to join in this great endeavour? It's been fun to research and write, and I'm about to enter editing purdah to knock the first draft into shape.

However, that is not all. I've been looking into other stories as well. I have another historical concept which I hope you'll hear more about soon, plus a modern day police story I'm working on now, and a modern spy follow up to Act of Vengeance. Oh, and I'm considering a new Templar Series story - but with that I am looking to produce a limited edition hardback, and ebook, that can be funded by a different method. I will let you know how that progresses.

But life would be dull if all I did was sit indoors and plan murders. This year I've been teaching again, with lectures and workshops at Swanwick writing school and Plymouth University. There are so many people keen to launch themselves on a writing career, and it's always really good to help them as far as I can. It's a curious thing that, since my presentation skills courses at Wordplex, Wang Laboratories, Rank Xerox and IBM, I've always looked for the main aspects of a talk as being enthusiastic nods, laughter, and occasional shock on the faces of the audience. However, talk about writing to writers and you're more likely to get utter, absorbed silence as a hundred biros scratch away in unison taking notes. And two or three folks with iPads, yes.

Also this year I have started fiddling with watercolours again. I've managed to paint several commissions, and have enjoyed the experience hugely. It's very good to hear from happy buyers and see pictures of my paintings hanging on their walls.

Usually I paint Devon and Dartmoor scenes. This year we went to the south of France, a major expedition for my family since we've only ever had two foreign holidays in the last twelve years. This time we needed the break badly. My wife researched all the homes to be rented in France, and finally picked a place with its own swimming pool, and a location not too far from Carcassonne - a town I've wanted to visit for as long as I've been interested in Medieval history.

It was lovely. We arrived, introduced ourselves to the delightful owners, Ulli and Roger Clark, and they showed us round. While chatting, Roger asked where we came from. He knew Dartmoor well, he said, so we told him our village. "Do you know John Christian?" he said. When I admitted I knew John well (a brilliant landscape artist and friend), Roger told us that John had visited their property over many years, bringing student artists to paint the scenery!

So, it has been a hard year for work and for losing friends, but I did manage to achieve a lot. 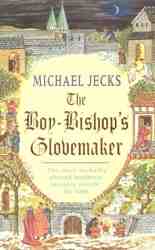 But now I'm reminded that it's Christmas. And Christmas is a time for giving things. Last week I was involved in a short discussion with someone on Twitter who had not read any of my books. She asked where she should start, and it occurred to me that a really good place to begin would be with a wintry tale. And what could be better than The Merchant's Partner or The Boy-Bishop's Glovemaker?

So I thought perhaps I should do my bit for Christmas by offering two signed copies of The Boy-Bishop's Glovemaker to the person who can send me the best short summary of my books! Angus Donald came up with the superb: "Michael Jecks puts the Evil in Medieval". What can you come up with?

The usual rules apply - it's entirely at random. I'll compile a list of names and select one. However, if you are on Twitter and Facebook and all those other good things, and you happen to share this competition, you may increase your chances, because you'll get your name added once for every mention in each medium - if that makes sense!

I will try to post the books so that (UK) readers will receive before Christmas, so that means that the cut-off has to be 16th December. If a foreign name is picked, I will post as soon as possible, but obviously you may not receive it until the New Year.

That, I think, is it for now. If you have any questions or comments, do please get in touch. In the meantime, I'd like to wish you a very Merry Christmas and a Happy and Prosperous New Year.
Michael Jecks