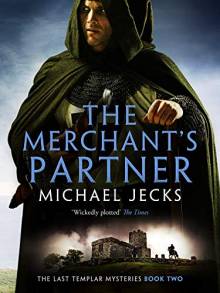 As midwife and healer, Agatha Kyteler is regarded as a witch by her superstitious neighbours in the village of Wefford in Devonshire, yet she has no shortage of callers, from the humblest villein to the most elegant and wealthy in the area. But when Agatha's body is found frozen and mutilated in a hedge one wintry morning, there seem to be no clues as to who could be responsible. Not until a local youth runs away and a hue and cry is raised.

Sir Baldwin Furnshill, Keeper of the King's Peace, is not convinced of the youth's guilt, and soon he manages to persuade his close friend Simon Puttock, bailiff of Lydford Castle, to help him continue with the investigation. As they endeavour to find the true culprit, the darker side of the village, with its undercurrents of suspicion, jealousy and disloyalty, emerges. And while Sir Baldwin becomes increasingly distracted by the beauty of a neighbouring merchant's wife, Simon finds himself wondering what happened to the foreigner who visited the normally sleepy area only to disappear shortly after Agatha's death, riding down towards the moors ...

"..the characters and descriptions bring the village and the icy moor to life... The denouement is satisfying and this is a properly clued mystery."

The Merchant's Partner is available on CD as an audiobook, read by Michael Tudor Barnes: order the audiobook from the publisher (ISIS). or as an Audible audio download from Amazon UK.

It is also available in a Kindle edition from Amazon.

The US paperback edition of The Merchant's Partner is still available from Amazon.com.