I have been remiss this year. The effort of working on books, working with students at Exeter University, keeping the Twitter and Facebook up to date - well, it's proving rather a lot to cope with for a poor, bemused and generally baffled author!

Still, it's that time of year again, and there's a lot to talk about. 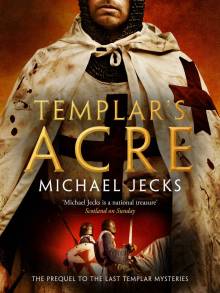 First, as most of you will have heard, there is a new book being launched on 6th June. It is called Templar's Acre, and it is a prequel.

This book tells the story of Baldwin's early life, from the time he left England to travel to Acre and take part in the defence of the city. It's a story about a youth and his gradual growth into a man, but all the time it is about the dreadful brutality of one of the most savage sieges of all time. And I confess, I am delighted with it.

I have managed to combine several aspects of life in this book. Yes, there is the violence of medieval life in all its horror, but there are all the other aspects of growing up, too.

My delight knew no bounds when I had reviews like:

"Michael Jecks at his very best. A breathtaking adventure which sweeps the reader directly into the heat, passion and horror of the infamous siege. Michael Jecks's detailed knowledge of medieval warfare sets this novel ablaze. Utterly enthralling. You are there fighting alongside Baldwin over every blood-soaked stone of Acre."

"This is a compelling story, enlivened by a fine historical imagination - whether the author is describing the state of pilgrims newly arrived in the Holy Land or the intensity and drama of the great siege at the end of the book. I particularly admire the way in which the political intrigues of the Lombard merchant states and military orders are woven into the narrative, and the ambiguities of Christian-Muslim relations in the cosmopolitan city that was Acre. It easily surpasses similar books, such as Bernard Cornwell's Azincourt, as an exciting narrative combining historical detail with the drama of fiction."

What is delightful is the effort Simon and Schuster are putting into selling the book. The cover, I think, is breathtaking, but they're making a lot of effort, sending me all over the place to sign copies. I'm wandering around Devon on 6th June, and then into Cornwall on 7th, when I'm heading down to Truro. Then, a day of rest on 8th when I'll be Morris dancing all over the Royal Cornwall Show. Later, I'll have to wander up to London and I'm being sent to Scotland too, so all in all, I've some busy times coming up.

But it's not all been writing and Templar's Acre. I've had other work to do. In the last few weeks I've had a great trip up to Stockton-on-Tees, a lovely place to visit, where I gave a talk to a great audience with my friend Karen Maitland. It was an excellent event, with the library pulling out all the stops, and the fact I had the chance to meet with and drink (too many) beers with Roger Cornwell and Jean Rogers, my brilliant website designers with Cornwell Internet. Later I went to the Scarborough Literary Festival with Medieval Murderers, where we really had a ball. If I only go to one festival next year, I'd like it to be Scarborough. Apart from anything else, the town is gorgeous and I'd love to get the chance to see a lot more of it.

Actually, it would be the second most important festival for me. The reason being, I'm helping organise a festival for April/May in Evesham.

It's a new concept I've been working on with the Evesham Hotel and some lovely people from the area. There are many festivals in the area - it is highly popular - but most festivals work on a principle that they want to cram people into a small location for a limited period. They get lots of authors to stumble over and give a talk, sometimes three or four at a time, and hope that the audience will be polite and not stampede for the bar at the first opportunity.

I know that sounds crazy for a new festival, but it's actually sensible. There will be one author each week, and over a day and a half the authors will give talks and workshops and get to know a smaller audience, so that hopefully authors and participants will have a great time. The audiences will have more involvement with the authors they want to meet, and the authors won't be rushing wildly from one place to another, they'll instead be relaxing in some fabulous locations. Yes, I know where, but I'm not saying yet!

Whacky? Perhaps. But I think it's a great idea, and with the hotel hosting much of the essential elements (rooms, food and drink), I think it'll be a festival to remember (and repeat).

In other news - yes, there is more - the first three books of the series will be published on 6th June along with Templar's Acre. Then, monthly, there will be three more. As matters stand, Simon &Schuster have the rights to the first thirteen books and the last three too, but that leaves a fifteen book hole in the middle. I am delighted to be able to say that Headline are being enormously kind and are discussing selling the rights to these to Simon & Schuster.

It'll be odd, removing the last of the Templar series from the Hachette label, but I think it makes sense for the whole series to be reunited under one publishing roof. Certainly the work Simon & Schuster have put into redesigning the covers has been wonderful. I know, I know, they aren't like the original Danuta Mayer covers, which pointed to the story inside, but they are the sort of covers that will hopefully bring in a new audience, and to be honest, with the way that incomes are being squeezed for authors, anything that brings in a few pennies is worthwhile.

And for the short term, that is why I have started writing a weekly diary blog for Cult Pens in Tiverton. I have been using pens and pencils and paper from Cult for several years now, and I've always been really happy with their speed of delivery and general efficiency. Somehow, I imagined them to be a vast organisation with a massive warehouse, because they always get the orders through, generally next-day. But I was astonished when I visited them, to find that it's a really high-tech business, and that they work from really modest modern offices.

Still, they have in recent years supplied me with Faber Castell and Graf von Faber Castell pencils, with Kaweco pens, Diamine inks, and I don't know how much paper. I'm now the absolutely delighted owner of a Visconti Homo Sapiens pen, which Cult have given me to sponsor my diary blog. Because of the pleasure of using this, I've decided to give up on tablet computers.

Some years ago I did have an iPad, and I loved it. It did everything I wanted - at first. Then I moved on to a smaller, but lovely HTC Flyer (for the full nine yards, go to my blog post at www.writerlywitterings.com), but I've decided that pen and paper are vastly more efficient for me. So for now, it'll be the Visconti (or Kaweco) and a new Midori Traveller's Notebook. All my basic ideas and developing plots will be in there, with me, all the time.

Why a Visconti? Well, for the full story, you can look at my review on GoodReads: but in essence, it's two things.

Since I've started tutoring and helping students, I've been taking my pens out a lot more regularly, and because I've always been petrified of losing my Drake or my Michael Jecks, I've resorted to my old Churchill. But this Conway Stewart, which has served me really well for the last decade and more, has suffered a bit. I've taken it with me to committee meetings at the Crime Writers' Association, and to AGMs while I was Chairman and Deputy Chairman. It's been to inaugural meetings of the Historical Writers' Association, and to signings from Sevenoaks to Seattle, and Princetown to Piacenza. I love that pen.

However, taking it in to Exeter every day for almost a year, I saw that I was damaging it. The barrel was getting scuffed and scratched, and I didn't like to see that. It was losing its shine. And, also, when I was doing some research into Sir John Sully at the Devon and Exeter Institute recently, I had to refill it several times to write out ten or eleven pages. That isn't really good enough for me.

So I decided that a Visconti would be better. Its matte barrel won't scratch - I know that, because it took the metal off a zip the other day - and the reservoir is vast. It keeps on going for more than a day, which is what I need.

Thus, with some regret, my Conway Stewarts are now held in a pen box on my desk. They aren't forgotten or retired, but the Visconti is the pen of choice. I reach for it automatically.

It's bizarre how the time flies. I seem to lurch from one project to another, with barely time to walk the dog. However, in a few weeks I'll be taking some days off to wander over the moors again for a few days. I haven't been able to do so for sixteen months because of different work pressures, and it'll be great to put on the rucksack and walk again.

In order to ensure that it's a less painful experience, I've put a lot of effort into cutting back my pack. I've gone through and looked at things long and hard, deciding what is necessary and essential, and what would be a "nice to have", ie can be left behind! By doing that, I've cut back from 21 Kg to 9Kg. However, if the weather doesn't get a bit warmer, that weight may grow again ...

And that, for now, is it. I've covered the new book, the old books, the hound, the pen, the university and a range of other topics in the middle. I hope you get as much fun and pleasure from your own works, and if you want to acquire a signed copy of any of my books, . I am always happy to sell old copies to good homes!

All best wishes and I hope you have a wonderful summer!
Michael Jecks