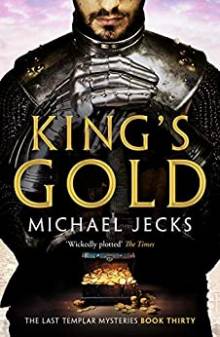 As the year 1326 draws to a close, London is in flames. King Edward II is a prisoner, and the forces of his vengeful queen, Isabella, and her lover Sir Roger Mortimer, are in the ascendant. The Bardi family, bankers who have funded the King, must look to their future with the Queen, steering a careful course between rival factions - if, that is, they can keep themselves alive.

Others, too, find their loyalties torn. Guarding the deposed King on behalf of Mortimer, Sir Baldwin de Furnshill and bailiff Simon Puttock find themselves entangled in a tightening net of conspiracy, greed, betrayal and murder.

The idea for this book first came to me a long time ago. I'd been gradually sifting the period for nuggets of brilliance, and the end of King Edward II's reign was particularly attractive for me. It had everything: infidelity, betrayal, deceit, war and a road trip too! For most of my career I have been trying to avoid using up too much material too quickly, but this moment in history was one I had looked forward to writing about for ages.

It was, after all, just about the most exciting period in English history: the King himself had been captured and was being held in Kenilworth while his wife, who had invaded the kingdom in order to kick out her husband, was lording it over all and sundry with her lover, Sir Roger Mortimer.

Just a bit galling for a chap. Clearly this was never going to be a good year for poor old Edward.

Just think. There he was, in a dingy dungeon beneath the castle walls, water dripping away... well, except he wasn't.

The audio edition, read by Michael Tudor Barnes is available from The Reading House in a choice of formats.


Praise for The King's Gold:

"This is a fast-moving story full of fierce fights and cunning conspiracies with domestic interludes. An interesting and instructive portrait of one of England's more unpleasant periods."

"Characters are aptly described so as to be almost hideous in their medieval realism, which feels authentic down to the finest detail."

"...an overwhelming atmosphere of traitorous deceit ... a worthy addition to the canon..."