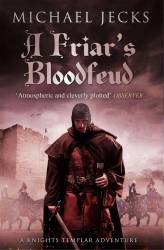 It is March 1324, and spring should soon be on its way. But the cruel winter is far from over...

In the rural idyll of Iddesleigh, Bailiff Simon Puttock's servant, Hugh, has been granted leave to look after his wife, Constance, and her son; but their happy time is to be short-lived. One day Constance is attacked and raped by a gang of men at their home. She sees her son being murdered and then Hugh is struck down, before she too is killed and the house set on fire.

When word reaches Simon that bloodshed and mayhem have entered almost into his own household, he and Sir Baldwin de Furnshill, Keeper of the King's Peace, set off immediately for Iddesleigh. They arrive to find the cottage burnt to the ground, the bodies from within already buried. It seems that Hugh must have perished in a dreadful accident - but appearances can be deceptive.

However, things are not so simple, and not only does Simon vow revenge, but as he and Baldwin begin their investigations, it becomes clear that evil lurks in this land, and the pain and bloodshed are far from over...

"The ... book came about because I was fascinated, while in America again, to read of way that powerful men had taken control of industries. Wherever you go, in Pittsburgh, Vegas or anywhere else, it seems that one clan or another has taken over the place. It reminded me of an incident in Devon's colourful history..."

Read Michael Jecks's newsletter to learn more about where the idea for A Friar's Bloodfeud came from.

"This is a gritty, attention keeping novel which makes you thankful you don't live in Medieval times"

"A strong series that gets stronger."

"...on a par with the very best crime fiction out there, just with more peasants."