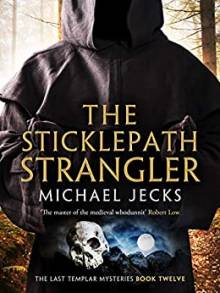 The discovery of a young girl's skeleton leads to Simon and Baldwin's darkest investigation yet ...

As the summer of 1322 brings sun to the Devonshire countryside, it seems that the small village of Sticklepath is destined to remain in gloom. Two playmates uncover the body of a young girl up on the moors. The body is that of Aline, the ten-year-old daughter of Swetricus, who went missing six years ago.

Baldwin Furnshill, Keeper of the King's Peace, and his friend Bailiff Simon Puttock are summoned to the scene to investigate, and soon discover Aline is not the only young girl to have been found dead in recent years. It seems that the villagers have been concealing not only a serial killer, but, judging by the state of the girls' bodies, a possible case of cannibalism.

But strange noises heard late at night from the Sticklepath cemetery and a haunted look in the eyes of the villagers could suggest an explanation more... supernatural.

"... even if historical mysteries are not your thing, give this a try ..."

The Sticklepath Strangler has been reissued by Canelo Adventure in a new Kindle edition.