No Law in the Land 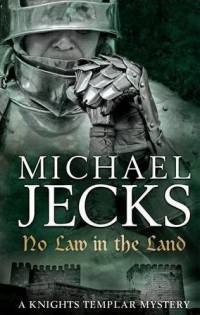 When King Edward II is informed that his wife, Queen Isabella, has defied him and remained in France with their son, the King flies into a rage. It is Sir Baldwin de Furnshill, Keeper of the King's Peace, and his friend Bailiff Simon Puttock, who had to break the news to him, and are now no longer in the king's favour.

They return to their homes in Devon, but there they find that outlaws hold sway in the land. Simon's house is occupied by Raymond, Cardinal de Fargis, who is hearing evidence between monks competing to win the abbacy of Tavistock. Sir Robert, a knight from the King's household, has turned outlaw from his castle near Crediton. When a pair of clerics are found murdered, Baldwin and Simon are asked to investigate. But when Simon's own daughter is threatened by Sir Robert, all hell is let loose.

"The investigations are engrossing, as Simon and Baldwin are assisted by a couple of familiar faces to fans of the series, but it's the character work that makes this book stand out."

No Law in the Land was first published by Headline on 11th June 2009; it appeared simultaneously in hardback and trade paperback (large format soft covers) editions. See Michael Jecks' May 2009 Newsletter to order one of a limited number of signed copies direct from the author.