The Templar, the Queen and Her Lover 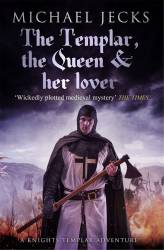 1325: while England is plundered by the King's ruthless favourite, and the court is torn by bitter rivalries, Baldwin and Simon are uprooted from Devon to undertake a dangerous mission to France.

Isabella, Queen of England, is out of favour with her husband; her privileges, her regal status, even her children have been taken from her. But when the king decides to try to mend his differences with France in one last attempt to avoid war between the two countries, who better to send as his envoy but Isabella, his wife and the French King's sister? And who better to travel with her and ensure her safety than Sir Baldwin de Furnshill, whose honesty and intelligence have won him respect at court - and perhaps an influential enemy, too.

In France, too, the royal couple are disunited; Blanche of Burgundy, wife of the King, is imprisoned in the Norman fortress of Château-Gaillard, where a terrible chain of events begins in which Baldwin and Simon will find themselves caught up. And death seems to follow them, as a servant is found murdered, with Baldwin's dagger lying next to the body. As Baldwin struggles to prove his innocence, the killer strikes again.

With so many English enemies gathering in Paris, will Baldwin be able to expose the culprit in time to protect the English King?

The Templar, the Queen and Her Lover was first published by Headline on 13th December 2007.