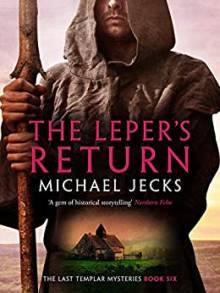 The town is a powder keg ready to explode... All it needs is a match.

England, 1320. The threat of civil war lies heavily on the kingdom. The monk Ralph of Houndeslow is new to Crediton's leper hospital. He finds that not only are his charges appallingly ill, but bigotry means that they are all shunned by the people of the town.

The citizens of Crediton have other concerns as well. The murder of goldsmith Godfrey of London and the assault on his daughter Cecily, for instance, crimes all too easily attributed to John of Irelaunde, a womaniser who has in the past tried to defraud the church. Sir Baldwin Furnshill, Keeper of the King's Peace, is not convinced that John is wicked enough to commit murder, and soon he is following other leads, with the able assistance of Bailiff Simon Puttock. But only when they discover the identity of the man overheard talking to Cecily before the attack will the astounding truth begin to emerge.

Meanwhile, the lepers lie victim to the rising hatred of the locals as fear and loathing are whipped into a frenzy of persecution. It's up to Baldwin and Simon to pour water on the blazing rumours. Civil war, a murder investigation and full scale public uproar with dark implications put Baldwin and Simon to the test once again...