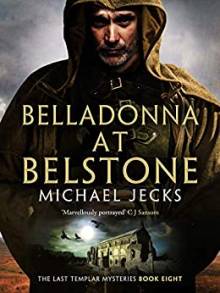 A house of God hides a dark secret...

It's 1321, and Lady Elizabeth, Prioress of St Mary's, is struggling to retain her position, especially since Sister Margherita, her treasurer, has accused her of lascivious disregard, claiming that, instead of paying for a new roof, Elizabeth has given money to the new vicar, a man she often sees alone - at night.

Sir Baldwin Furnshill, together with his old friend Simon Puttock, is summoned by the Bishop of Exeter's representative to investigate. There is no doubt that the threefold vows of poverty, chastity and obedience are routinely being broken.

When two nuns are murdered, Simon and Baldwin must face their most difficult case yet. The path to the truth twists and turns under the influence of sinister passions and secret ambitions, until they finally uncover the evil that lies at the heart of the convent.

"... another cracking mystery from Michael Jecks..."

Previous editions of Belladonna at Belstone, both hardback and paperback, are now out of print. The new Kindle edition was published by Canelo Adventure on 20th July 2020.