The Tournament of Blood 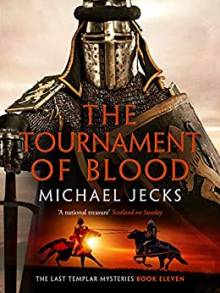 Lord Hugh de Courtenay's plan to host a tournament in the spring of 1322 is an opportunity the money-lenders of Oakhampton can't afford to miss. When the defeated knights find themselves unable to pay the traditional ransoms to their captors, they will have only one avenue open to them - and will accrue interest by the hour. But for Benjamin Dudenay - to whom most of the knights in Devon are indebted - the tournament will yield no such riches. A month before the festivities, he is found dead in an alleyway - beaten to death in an attack which tells a tale of bitter hatred.

For Sir Baldwin Furnshill, Keeper of the King's Peace, and his friend, Bailiff Simon Puttock, the priority is to complete the preparations for the tournament in time for Lord Hugh's arrival. Not an easy task when Hal Sachevyll and Wymond Carpenter, commissioned to provide the all-important stands, seem more interested in saving on materials than building a safe structure.

But when Wymond is found dead, his injuries bearing all the hallmarks of those inflicted by Benjamin's murderer, Sir Baldwin and Simon are faced with an additional problem: whoever killed the money-lender is not simply a debtor desperate to gain financial freedom, but a killer with a far greater and more sinister plan ...

"So what do we have here? First off, an essay on the history of the medieval tournament precedes the book which is worth the price of admission alone. Secondly, this is a proper mystery novel, despite the reader knowing the name and motive of the murderer. I can't really clarify that point without going into spoilers, but there's a complexity to events that is only revealed at the last minute, one element of which is genuinely surprising, especially to long-term readers. Third, the setting is fascinating. The backdrop of the medieval tournament is brought vividly to life, and the points of view of the various knights and squires gives a full picture of the event. And finally, it's a novel about family and the lengths that people will go to for their loved ones. And it works on every single one of those levels."

The Tournament of Blood will be reissued by Canelo Adventure on 14th September 2020 in a new Kindle edition.