Blood on the Sand 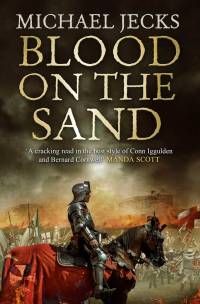 Calais, 1346. Berenger Fripper and his men are stationed in the ancient port city, a city under English control and surrounded by enemies.

They are here to defend their newly won territory from the French and their allies the Genoese. Enemies are all about them, but there is also trouble within. Someone in the vintaine is leaking vital information to the French, jeopardizing not only the safety of the men but also the future of the war, and Berenger must find out who before it's too late.

And when the vintaine is attacked at sea and captured by the Genoese it looks as though their luck has run out. Can Berenger defeat the enemies that surround him and keep the English victorious?

[Blood on the Sand] is a follow-up to Fields of Glory. Fields is the story of a vintaine of soldiers (think platoon or company) during the Crécy campaign. It tells the story of the battle from the point of view of the common archer, and sticks pretty solidly to the historical record, although there are some additional subplots for dramatic effect, of course!

Blood on the Sand is the story of what happened immediately following the campaign. In this the vintaine is settled in the siege outside Calais, but when they are put on board blockading ships, things go wrong and they are captured. From there we look at the events of the next twelve months or so from the perspective of Berenger Fripper, my vintener. It was a difficult book to write, mainly because there was so much going on at the time, and trying to hold it all in sequence in my head was not easy! However, with the support of my brilliant editor, I think the characters have been forced back into line and gradually obeyed my authorly demands!

Blood on the Sand was published by Simon & Schuster on June 4th 2015; it is now available in a paperback edition (January 2016). Now once more available in a Kindle edition.

Blood on the Sand is also available as a Soundings audiobook in a choice of formats, read by Michael Tudor Barnes.