The Prophecy of Death 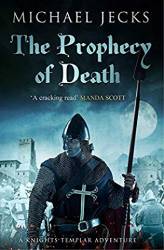 1325: There is turmoil in England. But could the Prophecy of St Thomas's Holy Oil save King Edward?

When Edward II was crowned king, no-one thought the death of a knight at his coronation was any more than a tragic accident; and they paid no attention to the prophecy that the king who is anointed with the holy oil will be a lion among men: he will conquer France, unite Christendom and throw the heathens from the Holy Land. Now, as the king and his friends become ever more unpopular, the tiny flask is suddenly a valuable property, and powerful men are anxious to possess it.

King Edward II has rejected his wife, Queen Isabella, confiscated her income, exiled her servants and taken away her children. Yet even now she is in France to negotiate peace with her brother, King Charles IV. Sir Baldwin de Furnshill, Keeper of the King's Peace, and his friend Bailiff Simon Puttock are among her entourage, entangled despite themselves in the high politics of the realm. They ask nothing better than to resume their quiet lives on their beloved Dartmoor. At last they are permitted to return to England, but their first task is to convey an urgent instruction for the King.

There is a new player on the scene at court: the Earl of Chester, eldest son of King Edward and Queen Isabella, who is now, in his early teens, beginning to assume the role of an adult. How will this affect the delicate web of alliances and enmities surrounding the king? Before long Baldwin and Simon find themselves at the centre of a deadly court intrigue involving the most powerful and ruthless men in the country, who will stop at nothing, not least murder, to achieve their ambitions...

"... if you want a thriller that draws on one of the richest veins of English history, then this is the book for you."

Read an extract from The Prophecy of Death - at long last Simon returns to his beloved moors.