Thanks to Ottakar's, especially those in Dorchester for a great series of events!

Well, this latest newsletter may be a little late, but that's only because there's so much going on. If you've looked at the website recently, you'll have seen that I've been travelling extensively in the last couple of months.

The problem is, when you're launching two books on the same date, it's difficult to keep the mileage down. In a couple of weeks I and the Medieval Murderers managed to visit central London, Greenwich, Lincoln, and then a marathon of Truro, Torquay, Newton Abbot, Portsmouth, Yeovil and Dorchester over three days. All thanks to the staff of Ottakar's and the libraries at Truro and Yeovil for their marvelous help and enthusiasm. They really know how to make an author feel wanted!

It's always a pleasure to do events with Bernard Knight.

The great thing is, even now, several weeks later, we're still in demand. Last week on the evening of the bomb attacks in London, Bernard, Philip and I visited Tavistock Library to speak, and had a great evening with fifty or more people. I was astonished that so many would come to listen to us on such a night, but then again, we're rather used to bomb attacks over here. We've seen enough damage done to poor old London over the years.

After hearing about the bombs in London, we had wondered whether we ought to cancel the evening event, but it's always very difficult deciding whether to pull the plug on an evening like that or not. Although I contacted the organizer, it was hard to track her down in time to stop Bernard or Philip from setting off, and in the end it seemed easier to carry on. We were very glad we did.

I am delighted to be able to say that there seems to be an ever-increasing number of readers of my stories. I've just completed a contract for three more books to be published by Avon in the USA (which will be The Crediton Killings, The Abbot's Gibbet and The Leper's Return); at the same time Martinez Roca are republishing The Last Templar and bringing out The Crediton Killings, the Italians have started the series, The Last Templar is coming out in Greek, and sales in Portugal, Holland and other countries seem to be building nicely. If this trend continues, I'll be able to afford a pension of some sort before I retire. Well, I can dream!

The process of writing is eased somewhat by having less to concentrate on. As readers of these missives will know, for the last year or so I was the Chairman of the Crime Writers' Association, which took up a certain amount of time. I am proud to boast that I am one of only a small, select group of ex-Chairmen and -women who managed to keep to deadlines while they were in the hot seat.

With the incomparable M. Arnaud Bamberger

There was one last job I had to do, though, even after passing on the baton. In May I had the enormous pleasure of recognizing the contribution made by one of our greatest crime writers. As the past Chairman I was able to award the Cartier Diamond Dagger for a lifetime's achievements in crime writing to Ian Rankin.

These events are always great fun - in retrospect. At the time, all you can think of is all those things you forgot to check up on. Now because the event was being held in The Savoy, which gives an organizer rather a warm, comfortable feeling, the terror was allayed somewhat, but when I heard that our very popular speaker, the Chief Executive of Cartier, M. Arnaud Bamberger, was still in an airplane somewhere high overhead, I was a little perturbed.

In fact I am afraid that it was probably that which ruined my perfectly designed and scripted speech.

With Ian Rankin at the Diamond Daggers

You see I had arranged for a microphone and table to be provided. In the past I've always had a podium provided, and I rather assumed that something along those lines would be there. Nope. There was a mike - a delightful, modern, cordless thing - and a stand. The stand was on the table. The table was against the wall. Behind the place where we would speak. So as I stood to welcome all to the award, and prepared to leaf through my cue cards, I suddenly realized that there was no way I could read them and hold the mike. I burbled incoherently for a few moments, reflected that people weren't there to hear me anyway, they had come to listen to M. Bamberger and Ian, shoved the cards in my pocket and passed the mike to M. Bamberger. As always, he was witty, cool, thoroughly professional, and a delight to have as our confederate in presenting Ian with his prize.

The amusing point of the evening was, Ian had visited an Edinburgh jeweller's shop in the week before the award, and had borrowed a Cartier watch. He was proud of this loan, and you may notice that any photos of Ian in this newsletter show the watch remarkably prominently!

And M. Bamberger, jet-lagged, fresh (if that's the word) from his flight, noticed the watch within moments of entering the room.

It was an excellent evening, made all the more special by the marvelous Cartier staff. Even the delightful Florence Paul... except for one incident.

The Cartier Diamond Dagger is a fabulous piece of design with a mass of diamonds set in the hilt. When the Cartier Dagger is open for display, the dagger stands upright in a metal book, on which all the names of past winners are engraved, as though it's been stabbed there. All evening the dagger was on display, and CWA members wandered up to it to peer, and there was quite a crush about the table on which it stood. After the presentation and speeches, Florence came to me, slightly flustered, and asked where the dagger itself was. Sure enough, when I glanced at the table, it had gone! The book was there, but no dagger full of diamonds.

This is the sort of nightmare Chairmen hope never to experience. I burbled for a moment about "Maybe Ian's got it to show to someone over there, or..." but mercifully, after only a few seconds, Florence burst out laughing and pulled the thing out of her pocket.

Isn't it nice to know that people have a sense of humour?

And that is about all I have had going on for now. What with The Tainted Relic being published with Simon and Schuster, and The Butcher of St Peter's coming out with Headline, the last weeks have been busy, but enormous fun too. I've had a great year in the Chair of the CWA, and I'm looking forward to some quality time with Sir Baldwin and Simon in the next few months writing the book for next summer.

Many thanks for asking for this newletter - and do please tell me if there is more you'd like to hear, or something you think I've missed. It's always rather a matter of guesswork when I sit down to compile it, and I never turn down any help!

All best wishes, and I hope you have a safe and calm summer break. And if you want to see what Dartmoor looks like in the summer - here are some tasters! 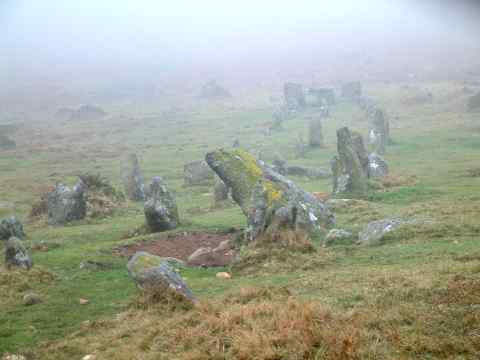 I have to award the gratitude of the hard-working author to Cross Pens. Some years ago, I was proud to buy a matching set of Cross writing instruments: propelling pencil, biro, and two fountain pens in gold. They have always been a delight to use, and I have been working with them during all my time as a writer. But...

Sadly, even brilliant tools can wear out. My gold fountain pen was excellent, but after some twenty years of sterling service, it started to leak. Now some years ago, a red Cross pen I had also leaked, so I mailed it back to Cross to ask if they could mend it. Alas, no! It was an old model and they had no spare parts, so the thing was swapped for a new pen which, although it worked superbly and smoothly, was a subtlely different style from the other four instruments. So when my gold Cross failed, I was reluctant to send it off. I thought, well, the thing has sentimental value to me. I don't want to lose it now. So I held back.

But time moves on, and what's the point of a pen you can't use? So I posted it off on Saturday to see whether it could be mended. Well, no, it can't. But without even checking, asking, or wondering whether I’d like to keep the old one, Cross sent it back, with an apology for it not working, and enclosing with it an entirely new, comparable gold Cross pen.

SO, TO LEE PETRYSZYN AND ALL AT CROSS – MANY THANKS. YOU’VE MADE MY DAY!