The Guilty Secrets of a Crime Writer

There are some things I'm known for, like drinking too much and gradually toppling over, which is natural and fine. I admit them, yup, and pass on. I'm happy to be known as a keen target shooter, mainly with pistols but rifles as well. That is all right. There are plenty of gun-nuts around. And I dabble with photography, with carpentry, with archery, and any number of other things. Yet this one thing, this one little thing, is the one which causes shame and embarrassment.

Hmm? I didn't mention it?

No, stop! Shut up! Look, it's serious, all right? Why? Oh, all right. This is what happened.

SCARY, huh?
(Thanks to Dave Hatton)

I was at a local concert a couple of years ago, and when I came out I was beckoned by a friend, Mike Palmer. He's seventy, looks sixty, and is always doing things for other people. I think it's because all his working life he was a bank manager, and this is payback time, but I could be wrong. Anyway, Mike told me he was thinking of setting up a Morris side, and would I like to think about joining it?

There was a short answer to that. Me? Bouncing around on the balls of my feet? All in white? With hankies? And bells? No.

But you know how it is. The first meet was on a Sunday, and there wasn't anything else on that day, and there was a promise of beer afterwards. And a friend intimated he might give it a go too. And somehow I ended up joining in.

Yes. I had set off on that slippery slope that led to me becoming a - a Morris Man.

Now in my defence let me say that we don't do hankies. My wife gave a strong hint that the day she saw me in white with hankies in my hands and bells on my legs was the day she'd pack up the kids and dogs and desert me. Sadly every attempt I've made to get the lads to try hankies has so far met without success. So instead what we tend to do is wield large sticks. They're all about two inch diameter poles of beech or oak, and they do, believe me, hurt like buggery when they go wrong and meet a knuckle by mistake. I speak from experience. 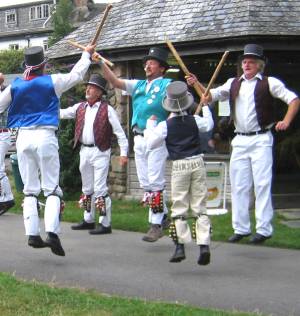 As well as Dartmoor Folk Festival day. What larks.
(Again, thanks to Dave Hatton)

The problem is the kind of guy who was asked to join. Initially we had one university Doctor, one ex-para, two navy chaps, a software engineer and three retired gentlemen - and me. And I was the second youngest. I still am. The fittest ones are the oldest, naturally. We youngsters all enjoyed our young adulthood too much.

We began with the idea that we'd learn a simple dance. Bloody Hell! It looks easy when you watch other people, but believe me, when it's you, it's not so straightforward. I have had to learn single-stepping, double-stepping, capering, huckling and hooking (you don't want to know) and the finer points of heys. And then there is the difference between the inner foot and outer (which changes as you dance, of course), and all the while trying to avoid letting your partner beat the living... look, those are big sticks, OK?

We began really because Mike was hacked off with the fact that other Morris sides he joined all grew too serious. He wanted a side with no management committee and in which all the members could simply enjoy themselves. I think that there is also a strong urge for him to preach the history of Morris, too.

Brief lesson: before the First World War, many villages each had their own Morris side. There were sides who'd dress up all in white, and the Border sides who'd wear black, even blacking up their faces, and different traditions for every area. But Morris sides were made up of fit young men. In a patriotic age, just as happened with so many other groups - social and commercial guilds, farming societies, men from mining communities - these sides joined the war en masse. And just as happened with the other groups, many of these Morris sides were wiped out in the Great War. It was the tragedy of the Somme that so many communities lost all their men on the first day, if not in the grinding horror that succeeded in that vile, blasted waste.

After the war there were few if any records on film to show how they had danced, and many traditions were lost. Fortunately the folklore collector Cecil Sharpe saw his first Morris team on 26th December 1898, the Headington Quarry Morris Men. He "was hooked, and began notating dances for archive purposes and also teaching Morris dancing". Thanks, Mike Palmer. Now only a few "traditions", the styles relating to specific villages, remain: Adderbury, Bampton and so on. Most of the others have gone.

Does it matter? When there are members of parliament who declare a love of foreign culture, but then say that their vision of hell would be a bunch of folk singers in a local pub, should we worry? Of course we should. Morris is one of those small facets of life that are vital to our culture. They are not crucial to modern city life, no, but just exactly which pieces of our cultural heritage should we seek to protect? In an age when even to have two fellows playing instruments or singing in a pub requires a specific license, but any pub may have a plasma screen to show football without any control, clearly matters of heritage and culture are lost on our politicians.

Morris is perhaps the only remaining aspect of life that is truly uniquely English. It involves drinking and - no violence. It involves precision, skill, and, believe it or not, a great amount of stamina. And it links us to our forbears. 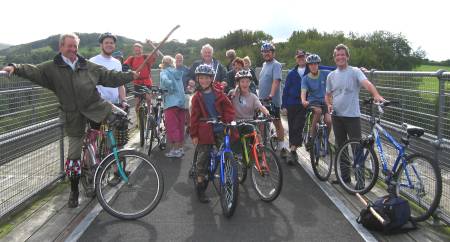 We meet up twice a month to practise, and go out on tour whenever we can, which usually means travelling to a pub, dancing a little, drinking a lot, dancing a bit more, and wobbling our way home. One meet last year was particularly well-attended since we cycled from Okehampton on the new cycleway, dancing at the old railway station, up on Meldon Viaduct, and at other stages before cycling home again. Marvellous fun, although pretty damp because Dartmoor managed to live up to expectation with the weather. I personally clocked up some twenty three miles, with dances at regular intervals.

So - Tinners' Morris started two years ago with Mike Palmer as our lead musician. Our side has grown from the original eight or so to include about fifteen men. We have our own kit, and yes, we do have bells, but the main thing for us is, it's fun. We dance the old dances, we enjoy ourselves, and we try to entertain. So far we seem to have succeeded. This year we've been asked to two French festivals, to tours all over the west country and beyond, and we've even been asked to go to the Royal Cornish show for two days.

I know. I know. "But all you do is prance about waving hankies..." No we don't, but I have to admit that I've watched Morris teams with a more observant eye recently. You look, next time you get a chance. When they're springing up and waving those floaty little silky things, you try to copy them. Jump as high as them, as often as them, and see how long you'll last. It is an amazingly tough way of dancing, and there are a load of different dances to learn. Having danced for a couple of hours this morning, my legs can attest to the energy used.

So, is it a guilty pleasure? A cause for shame and embarrassment? Well, it's probably less socially acceptable in civilised society than, say, being a Mason, or member of the Tory party now - but infinitely preferable to admitting you ever voted for Tony Blair.

And at least every time we go dancing, we tend to get free beer. Which is, I think, roughly where this little article began?