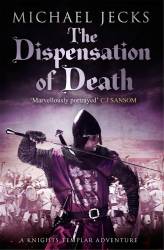 An assassin is observing Westminster. He's on his way to meet with his lord and master, Hugh le Despenser. At the New Temple, he learns who he's being asked to kill.

There are feverish moves afoot. To maintain peace, the French king is demanding he receives homage from King Edward II in Paris. The king is unwilling because he shrewdly suspects that as soon as he leaves England, his friend and lover Hugh le Despenser will be murdered. Instead he allows counsellors to suggest that the queen should go in his place. As the sister of the French king, she should be in a better position to negotiate for him.

But no sooner has the decision been made then the assassin himself is found murdered near the Queen's chamber. Despenser asks Sir Baldwin Furnshill, Keeper of the King's Peace and his friend Bailiff Simon Puttock to do all they can to find the man who killed his assassin.

But the mystery gets darker when a second man is found dead, one of the queen's cooks, and Simon and Baldwin realise that there is someone else who is seeking to defend the queen!

"...another success for Michael Jecks..."

Dispensation of Death was first published by Headline on 14th June 2007.


"Each page is densely packed with cuckolding, coarseness, lewdness, lechery, gore galore, but also with nobility. A heady mix!"